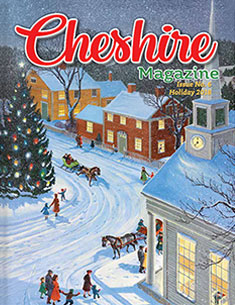 Cheshire Magazine is the premier publication for Cheshire, showcasing its people, history and picturesque landscape. Cheshire is the perfect, quaint New England town to live in!

Enter “Where Is It” Contest Advertise With Us View Coupons

Settled as part of Wallingford in 1694, Cheshire, Connecticut was incorporated in 1780. Prospect was part of Cheshire until 1829. Known as “The Bedding Plant Capital of Connecticut” for its agriculture industry, Cheshire is the center of population in the state.

The town has been ranked as a top small town to live in by CNN’s Money Magazine and Connecticut Magazine, making it an attractive option for growing families. There are public, private and alternative school options for students in kindergarten through high school.

The location of Cheshire provides easy access to several major cities in Connecticut. Transportation passages include Interstate 691, Interstate 84 and Connecticut Route 10, with two smaller east-west routes. Cheshire is located 14 miles from New Haven, 25 miles from Hartford and 30 miles from Bridgeport. However, the town itself has a diverse and expanding business community of its own!

Cheshire has four locations on the National Register of Historic Places, including its own historic district. The town is also home to several hiking trails, recreation areas for swimming, fishing and picnicking, and local museums.

Looking for something fun to do in Cheshire? Annual events include the Strawberry Festival in June, the Cheshire Fair in August and the Fall Festival in September and the Christmas Fair in December. All four yearly events have entertainment for the whole family.

Our Magazines
Advertise With Us
Get In Touch
© Copyright 2022 | RDS Media, LLC | All Rights Reserved.
Digital Marketing by Imagine It Consulting